⧼Seealso⧽: History of pottery in the Southern Levant

Continuity through the ages[editar | editar código]

Modern Palestinian pots, bowls, jugs and cups, particularly those produced prior to the establishment of Israel in 1948, are similar in shape, fabric and decoration to their ancient equivalents.[1] Winifred Needler, Deputy Keeper of the Near Eastern Department at the Royal Ontario Museum of Archaeology writes in Palestine: Ancient and Modern (1949) that this continuity demonstrates "how persistently the potter's craft clung to tradition through the centuries."[1] R.A. Stewart Macalister, in his work The Excavation of Gezer (1912), underlines this point prefacing his overview of Palestinian pottery throughout the ages by noting that:

"... the division into periods [of Palestinian pottery] is to some extent a necessary evil, in that it suggests a misleading idea of discontinuity - as though the periods were so many water-tight compartments with fixed partitions between them. In point of fact, each period shades almost imperceptibly into the next."[2]

Commenting further on modern examples of Palestinian pottery, Needler notes that the clay used is of much the same composition as the ancient examples and is shaped, smoothed and baked in the same way, with the surfaces often decorated in similar painted, incised, or moulded techniques.[1] "Ramallah" ware, a think-walled, pinkish drab pottery painted with simple geometric and plant designs in red, is handmade; as are the "frying pan" and the home-made braziers. Other pottery is wheel-made, largely undecorated, but often with a glossy black glaze and crude designs in bright red.[1]

During the Roman and early Byzantine period, common kitchen ware of the Galilee region was produced primarily in Kafr 'Inan (Kefar Hananya). One item produced there, the "Kefar Hananya I CE type," is also known as the "Galilean bowl."[3] This coarse ware network was one of many sub-regional and micro-regional coarse and fine ware ceramic culture networks in operation in the Levant.[4]

In exploring the similarities throughout the different eras, Macalister discusses Palestinian pottery in the Arab period and its shared characteristics with the ancient and modern pottery produced in Palestine. [5] Of the pottery from the Arab period, he notes: "...there seem to have been large globular jars, not unlike the Pre-Semitic and First Semitic barrel-shaped jars." He describes them as having "ledge-handles, though of a different shape from the early ledge-handles," and continues to write that, "... this kind of handle is still made in native pottery."[5] Further, he notes that jar-covers from this period are strikingly similar to those of the "earliest type of ware," the "Second Semitic jar-covers, with two loops in the middle of the saucer."[5]

Some of the linear decoration techniques also show a "startling resemblance to the painted ornament of the Second Semitic Period."[5] Macalister notes that the major differences are that "The slip and the paint have a fatter, richer texture in the Arab ware than in the Amorite, and the painted devices are more geometrical, more mechanical, and also more minute and 'finicking' in the later than in the earlier pottery."[5] As for similarities with the Roman period, horizontal ribbing, a key characteristic of Roman era pottery, "is as common in this period as in the Roman, but it seems to differ in outline."[5]

The Palestinian Association for Cultural Exchange (PACE) has put together a collection of traditional pottery, including cooking pots, jugs, mugs and plates that are manufactured by men and women from historic villages like al-Jib (Gibeon), Beitin (Bethel) and Senjel. They are hand-made and fired in open, charcoal-fueled kilns as in ancient times.[6]

Palestinian ceramics are produced at traditional family-owned factories in Hebron and other cities. Covering a wide range of colorful hand painted plates, vases, hanging ornaments, tiles, cups, jars and framed mirrors, the ceramics are known for the intricate detail of their flower and arabesque patterns.[6]

Palestinian artists who produce contemporary clay sculpture, like Vera Tamari from Ramallah, have incorporated the clay shards from ancient pieces into their work. Says Tamari,

"My own artwork is inspired by seeing the history in Palestinian land. For a time, I used a lot of shards of pottery as a theme in my clay work. You find shards of pottery everywhere because Palestine has had so many thousand of years of history that you walk on a hill and you just find these little pieces of pottery that are evidence of life that was there — pieces of jars, of plates, of bowls."[7]

Dina Ghazal from Nablus use another approach, believing that abstraction will best express the essence of her ideas. The qualities of the material she works with are very important for Ghazal, she explains that her work is an attempt to show the versatility of the medium and she hopes to challenge traditional perceptions of the use of the clay.[8] 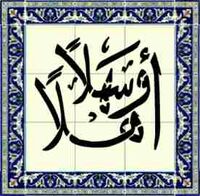