For other uses of "Celadon", see Celadon (disambiguation).

Celadon is a term for ceramics denoting both a type of glaze and a ware of celadon (color). This type of ware was invented in ancient China, such as in the Zhejiang province.[1] Celadon has since been spread to various regions in Asia, such as Northern Thailand.[2]

Historian Wang Zhongshu states that shards with a celadon ceramic glaze have been recovered from Eastern Han Dynasty (25–220 AD) tomb excavations in Zhejiang; he also states that this type of ceramic became well known during the Three Kingdoms (220–265).[3] Richard Dewar disagrees with Wang's classification, stating that true celadon—which requires a minimum 1260°C (2300°F) furnace temperature, a preferred range of 1285° to 1305°C (2345° to 2381°F), and reduced firing—was not created until the beginning of the Northern Song Dynasty (960–1127).[4] The unique grey or green celadon glaze is a result of iron oxide's transformation from ferric to ferrous iron (Fe2O3 → FeO) during the firing process.[4] Longquan celadon wares, which Nigel Wood (1999) writes were first made during the Northern Song, had bluish, blue-green, and olive green glazes and high silica and alkali contents which resembled later porcelain wares made at Jingdezhen and Dehua rather than stonewares.[5]

The term "celadon" for the pottery's pale jade-green glaze was coined by European connoisseurs of the wares. One theory is that the term first appeared in France in the 17th century and that it is named after the shepherd Celadon in Honoré d'Urfé's French pastoral romance, L'Astrée (1627), who wore pale green ribbons. (D'Urfe, in turn, borrowed his character from Ovid's Metamorphoses.) Another theory is that the term is a corruption of the name of Saladin (Salah ad-Din), the Ayyubid Sultan, who in 1171 sent forty pieces of the ceramic to Nur ad-Din Zengi, Sultan of Syria.[6] Yet a third theory is that the word derives from the Sanskrit sila and dhara, which mean "green" and "stone" respectively.

Celadon glaze refers to a family of transparent glazes, many with pronounced (and sometimes accentuated) cracks in the glaze produced in a wide variety of colors, generally used on porcelain or stoneware clay bodies. Celadon glazes have such popularity and impact that pieces made with it are often referred to as "celadons."

Celadon glazes can be produced in a variety of colors, including white, grey, blue and yellow, depending on several factors: 1) the thickness of the applied glaze, 2) the type of clay to which it is applied, and 3) the exact makeup of the glaze. However, the most famous shades range in color from a very pale green to deep intense green, often meaning to mimic the green shades of jade. The color is produced by iron oxide in the glaze recipe or clay body. Celadon are almost exclusively fired in a reducing atmosphere kiln as the chemical changes in the iron oxide which accompany depriving it of free oxygen are what produce the desired colors. As with most glazes, crazing (a glaze defect) can occur in the glaze and, if the characteristic is desirable, is referred to as "crackle" glaze.

Some of the world's most coveted and admired masterpieces of ceramics art were produced in Korea during the Goryeo and Joseon dynasties.[7] An inlaid celadon technique known as "Sanggam", where potters would engrave semi-dried pottery with designs and place black or white clay materials within the engraving, was invented in Korea during this time.[7][8][9][10][11]

"Korean celadon" is often referred to as "Goryeo celadon," which is usually a pale green-blue in color. The glaze was developed and refined during the 10th and 11th centuries during the Goryeo period, from which it derives its name. Korean celadon reached its zenith between the 12th and early 13th centuries, however, the Mongol invasions of Korea in the 13th century and persecution by the Joseon Dynasty government destroyed the craft.

Traditional Korean celadon ware has distinctive decorative elements. The most distinctive are decorated by overlaying glaze on contrasting clay bodies. With inlaid designs, known as "Sanggam" in Korean, small pieces of colored clay are inlaid in the base clay. Carved or slip-carved designs require layer of a different colored clay adhered to the base clay of the piece. The layers are then carved away to reveal the varying colors. Modern potters, with modern materials and tools, have attempted to recreate Korean celadon techniques.

Since about 1420 the Counts of Katzenelnbogen have owned the oldest European import of celadon, exhibited in Kassel in the Landesmuseum.[12] 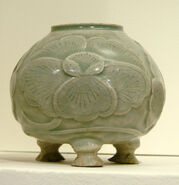 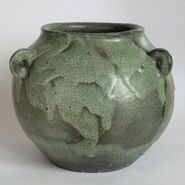